The Earth’s Layers
Human beings have always imagined what it would be like to journey to the center of the Earth. There are many books and movies about characters who have adventures that take them to the Earth’s core, or even all the way to the other side of world! It’s fun to pretend that we can tunnel to China, but scientists have proven that humans will never be able to dig through the center of the Earth. The Earth has three very thick layers, and the center is so hot that humans could never survive there. In this lesson, you will learn about these layers from the inside out.
The Core
The core is the innermost layer of the Earth. It is made up of two parts: the inner core and the outer core. At the very center of the Earth is the inner core. It is solid, and is made up almost entirely of iron. The inner core remains solid because it is under an extreme amount of pressure. It is about 1200 kilometers thick.
Have you ever heard that the Earth’s center is made up of lava? While that is not technically true, the core is partially liquid. This liquid layer is called the outer core because it surrounds the inner core. It is made up of iron and another metal called nickel. It also contains sulfur. The outer core is kept very hot by the Earth’s inner core. When elements like metal get very hot they become molten, or liquid. The outer core is about 2300 kilometers thick.
The Mantle
The middle layer of Earth is called the mantle. At 2900 kilometers deep, it is the thickest layer of the Earth. Like the core, the mantle has two layers, the upper and lower mantle. Because of its thickness, the mantle is where most of the Earth’s heat is located. The average temperature of the Earth’s mantle is about 1000 degrees Celsius. At this temperature, the mantle remains a solid, but is flexible like plastic. When a heavy load like an ice cap pushes on the mantle, it can flex and move out of the way to make room. Once the load lessens, the mantle can return to its original position.
The mantle retains a lot of heat, which is circulated throughout the mantle in spaces called convective cells. The movement of heat can cause the plates of the sea floor and continents to shift. Over millions of years the plates of the earth can move quite a lot. When these shifts happen quickly, we experience earthquakes.
The Crust
The top layer of the Earth is called the crust. The crust is the layer upon which we live and build our cities. The crust is the layer that can sustain life, yet it is the thinnest layer of the Earth. If you measure the thickness of the Earth’s mantle on a continent, it would be between 35 and 75 kilometers thick. If measured from the deepest basins of the ocean, the mantle is only 5 to 10 kilometers thick. It is made up of brittle minerals like calcium and sodium. Because it is very cold compared to the mantle and core, the crust is easily cracked and broken. However, the crust is also where we find valuable resources like oil, water, and gas.
Summing Up
With special instruments, scientists have been able to create detailed maps of the Earth’s layers. By measuring temperature, sound waves, and other factors, earth scientists are able to find fossil fuels, element deposits, and even underground lakes! New technologies even allow scientists to study the changes deep in Earth’s core. We may never be able to journey to the center of the Earth, but each day scientists make discoveries that help us understand more about the planet upon which we live.


The Earth’s Layers Questions
Read the questions below and circle the letter of the correct answer.

1. Which of the following is NOT one of the Earth’s layers?
a. Inner core
b. Crust
c. Outer mantle
d. Lower mantle

3. The core of the Earth is made up almost completely of which element?
a. Iron
b. Granite
c. Sulfur
d. Calcium

4. Which layer of the earth is the thickest?
a. Mantle
b. Core
c. Crust
d. All layers are the same thickness

5. Which of the earth’s layers is liquid?
a. Lower crust
b. Outer core
c. Inner core
d. mantle

Read each statement below. If it is true, write a “T” in the blank; if it is false, write an “F”.
____1. The center of the Earth is made of molten rock.
____2. Most of the Earth’s heat is stored in the mantle.
____3. The outer core is liquid.
____4. Earthquakes occur when heat travels through the mantle and causes tectonic plates to shift.
____5. The thinnest parts of the Earth’s crust are its continents.
____6. Extreme pressure causes the inner core of the Earth to remain solid.
____7. The crust of the Earth is much cooler than its other layers.
____8. The Earth’s mantle is flexible and shifts under heavy loads.
____9. The core is where geologists look for oil, gas, and other resources.
___10. The crust is broken down into two parts: the upper and lower crust.

Label the layers of the earth. 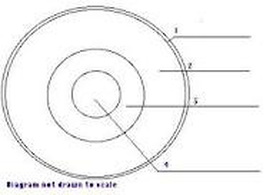